Comrades Marathon Mental Tip #1: Be an optimist (not a positive thinker) 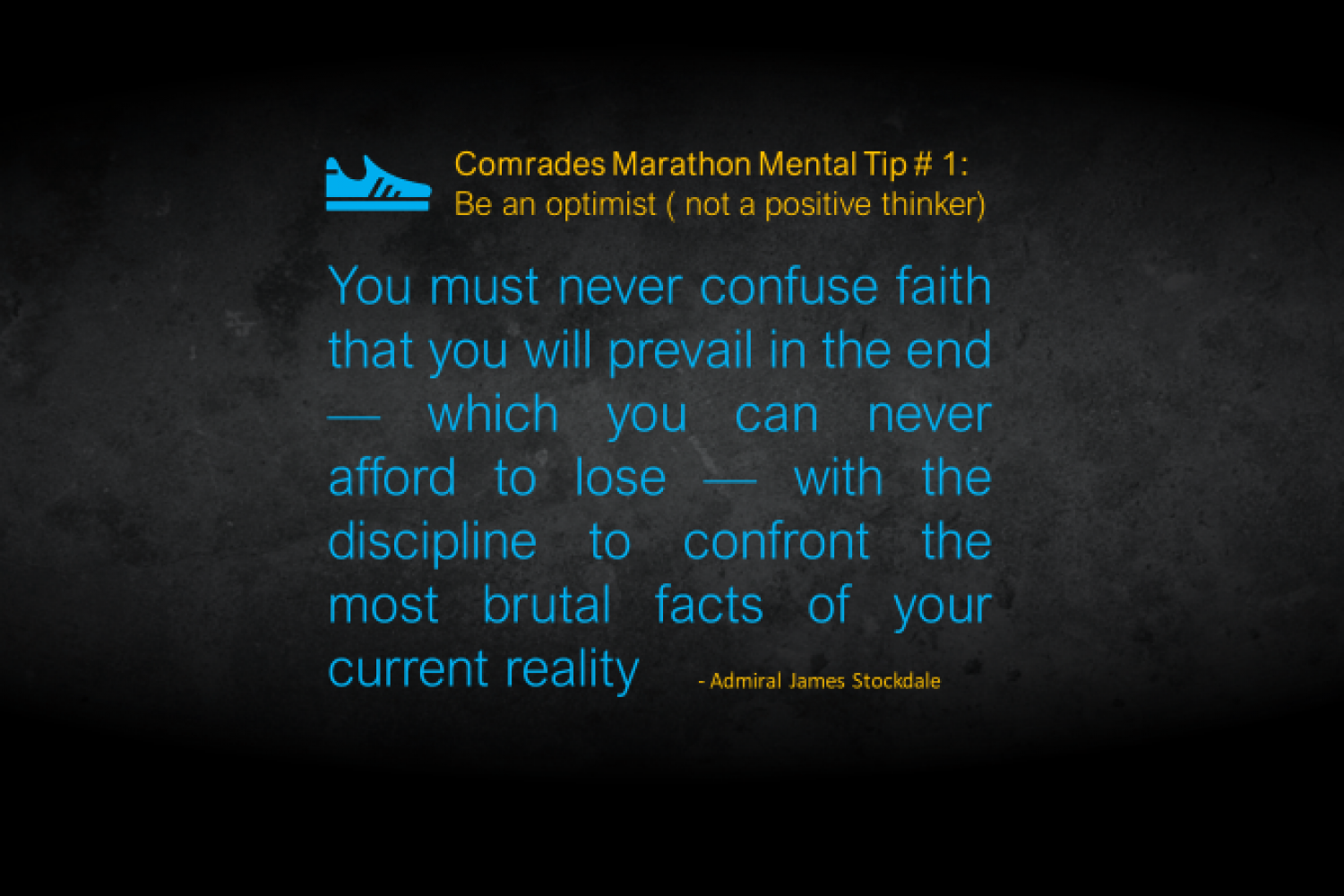 Ask anyone that has run 89km’s and they will tell you that getting through those last few kilometres has less to do with your body, and more to do with your mind. But to be fair, any endurance event requires an athlete to have a combination of both physical and mental skills, and although a lot of the hard work has already been done, there are still a few key mental tips you can learn in the lead up to race that can help on the day.

#1 Be an Optimist (not a positive thinker)

I am sure someone before the race will tell you ‘Just be positive’ and it will all work out okay. The problem is that positive thinking often doesn’t work. You are still stressed and worried, while often trying to put on a brave (positive) face. You want to rather think like an optimist.

So what’s the difference?

In the Vietnam war US Admiral James Stockdale and his men were captured and put into a prisoner of war camp. For 8 years he and his men had to endure the harshest conditions and treatment. So, who fared the best? Interestingly, not the ones who just thought positively:

It is almost as if these men tried to ignore reality and would lose hope when it became real. Positive thinking often puts you in a position of trying to pretend everything is okay (or trying to trick yourself into believing it) when it is actually not okay.

The men that survived being a prisoner of war were those that always acknowledged the situation they found themselves in – as Admiral Stockdale would say, they faced the brutal facts of the situation – they didn’t try to ignore it or pretend it wasn’t bad. But, and this is the key, they would always hold onto the hope that they would triumph in the end. In other words, they would think “This is pretty bad right now, but I know we will make it through in the end”.

How each prisoner got through was slightly different for each, but one universal coping strategy was a type of Morse Code they developed and would tap on their cell walls in order to communicate with each other. As long as they kept tapping, they remained hopeful and could endure.

This is optimism: acknowledging the difficulties of the situation, but then continuing to do what is needed to get through it. Optimists essentially keep trying.

In Comrades there will be times you are tired, your feet hurt, and you are worried about Polly Shortts just around the corner. You can’t pretend you are not feeling any of those things. Its okay to acknowledge how you feel – face the facts –  but then you have to quickly refocus on doing the things that you know will help you get through to the end. Maybe it’s focusing on just the next 500m (or just the next 10 steps) or making sure you keep drinking when you need to, or maybe it’s taking your mind off your tired legs by talking to those around you. You will know from your long training runs what strategies help you find a way through and to keep going – keep doing those things. And 89kms will come to an end one step at a time.